A few points about last week’s match against Man Yoo…
(1) The match against Man Utd was about much more than the league.
(2) The fact is that there were decisions in the match that were skewed in Man Utd's favor.

On a day all about Justice For The 96, injustice was done to in the match.

(3) What should not be tolerated is the 'fans' who made airplane signals to man Utd fans after the game. They have to be found and criminally prosecuted. Similarly, Manchester United should open criminal prosecution against the fans who chanted against Hillsborough / Heysel

(4) fans at Anfield have to be applauded especially for raising the spirits of Rodgers by chanting his name.

(5) This season is not a write off for Liverpool Football Club.

For my first blog entry, I want to share a few thoughts on the recent – Manchester United game.
As any educated football fan would know, this game was much bigger than any another EPL game. Firstly, it’s the first home game for Liverpool after the Hillsborough Independent Panel exonerated the Liverpool fans of any blame for the disaster that led to 96 lives being perished, all Liverpool fans. Secondly, it’s a game pitting Liverpool and Manchester United, by far the 2 most successful clubs in and among the biggest clubs in the world. So no, it was not just any another game.

The one theme that I want to touch on for this post is à injustice.

As I mentioned earlier, fans were finally exonerated of any blame after 23 long years.
Finally, justice in some form, though the real justice will come when the perpetrators are criminally prosecuted.
So onto the match. It was obvious from the word go that players wanted it far more than the Manchester United players. Gerrard was on song, Joe Allen as impressive as ever and proving he is the jewel in the crown again. were passing the ball better, controlling the midfield and even the defensive errors were cut down.

And then it happened.

The first moment of injustice. What was Halsey thinking? An absolutely ridiculous decision.

Sorry,I am getting ahead of myself.

My blood has started boiling.

Shelvey gets a great tackle in on Ryan Giggs and recovers instantly to go for the loose ball. Now Johnny Evans and Shelvey both go for the ball and both lunge for it. Both made reckless and possibly dangerous tackles.
But Johnny Evans has something that Shelvey doesn’t. 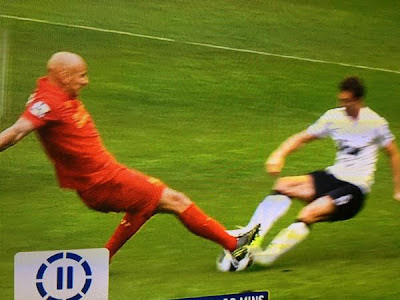 Johnny Evans rolls on the ground afterwards, only to recover after red has been shown.
The fact is that only Shelvey was punished when both players should have been treated equally.
Both should have been given a yellow in my opinion.

Shelvey is rightly pissed and has a few choice words for Fergie on his way to the tunnel.

So screw it. Whatever. Let’s go on. End of the half. Goalless and still the better team after the sending off. And they start the second half with a bang. Goal in the first minute and it had to be the skipper. Captain fantastic. Steven Gerrard. Fantastic work by Suso too for the buildup.
And of course, Manchester United equalize within 5 minutes through a fantastic strike by Rafael. What a player he’s going to be. A sure shot for the best right back in the world in a couple of years if he can get over the injury and indiscipline issues.

The second moment of injustice happens after this.
gets a penalty without any contact. This was just, frankly, embarrassing for Halsey, the referee. Suarez, before that, had a legit penalty appeal turned down despite there being contact by Evans but Halsey turns it down.
So of course, when dives, it should have been turned down.

But here the Fergie effect comes into play.

A day before the match, Fergie says that they never get decisions going their way at Anfield. It was an absolutely pathetic decision that the referee should be ashamed of and when you make a decision like this at
1-1, you have to make sure that you are absolutely spot on about it.

You could tell by his arms waving after awarding the penalty that he wasn’t sure about it but gave it anyways.
RVP converts to give United the lead at 1 – 2.

The third moment of injustice to happens after this. RVP makes a ridiculous tackle on Suso which was very similar to the one that Shelvey gets a red card for. But in this case RVP only gets a yellow. I think a yellow was fair enough, but given that Shelvey got a red, RVP should have gotten a red too.

So that is the story of the match. The injustice shown to players and fans by Halsey on a day that was all about Justice for the 96.

So of course, fans are pissed.

For me, the ‘fans’ who should be criminally prosecuted are the ones who made the airplanes gesture to the travelling Manchester United fans at Anfield. It is absolutely disgraceful and there should be no place for something like this on a football field. Similarly, Manchester United should open criminal prosecution against the fans who chanted against Hillsborough / Heysel.

Finally, I want to say a couple of things about Brendan Rodgers. I have become a big fan of him, despite our start of the season. He’s fearless. Not afraid of telling underperforming senior players like Enrique and Downing to improve or get out of the team and neither is he afraid of playing youngsters in huge games like against and in subsequent matchers and Suso against Manchester United. I also think the fans at Anfield deserve a huge round of applause for raising Rodgers spirits by chanting “Only one Bendan Rodgers” as a reply to “You are getting sacked in the morning” by the travelling Manchester United supporters. That would have raised his spirits.

Brilliant touch by the fans.

So what’s next for ? Is this season a write off? Absolutely not. I feel that the target for from this point onwards for this season should be between 60 – 70 points for the season.

This might or might not put Liverpool out of contention for a CL position, but by achieving this points tally, the youngsters would have proven that they have not only the skill but the mentality to play for at the top level. As Paul Tomkins rightly put it, the season starts now for .

It’s not off to a good start in terms of injuries and lack of personnel, but the true test of character is when your backs are up against the wall.

This post is made by guest writer: Akhil Bandhari
Posted by Jerry De Silva at 06:46