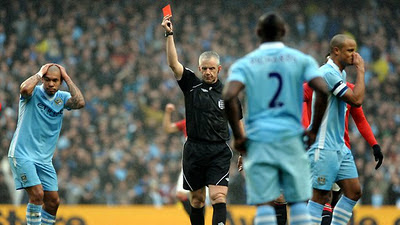 Man Utd were absolutely fantastic in the game against Man City. Yes you heard that right.
I am actually praising Man Utd.
Why? You might ask.
For two reasons.

1. They won against a team who absolutely humiliated them at Old Trafford.
2. Their win set up a tie with Liverpool at Anfield in the next round.

I'll get into the first reason.

How do you praise a Man Utd team that struggled mightily to beat a Man City team with 10 men?
Well firstly you have to consider the psychological damage that City inflicted on Man Utd at Old Trafford with THAT 6-1 margin.
To lose by that margin at home must hurt.
It was not just hurt. It was humiliation.

To come back to the Etihad stadium and overcome that same team minus Balotelli, Yaya Toure and Joe Hart involved overcoming a huge mountain of fear.
If you noticed, Man Utd played with a lot of fear against Man City.
That's why they couldn't capitalise in the 2nd half when the score was 3-0(Could have been 4-0 in the 1st half).
They were still afraid even against 10 men.
They were proven right.

City came back.
First with a Kolarov rocket.
Then Aguero pouncing on a Man Utd goalkeeping error.(How many times have you heard that this season?)
Man Utd were shaking from a 10-man City onslaught.
The final whistle couldn't come early enough.

Who has the advantage now in the title race?

Man City.
Why?
Without the need to defend their FA Cup, they only have the League title, Carling Cup semifinals and the Europa Cup to concentrate on.
Mancini has said repeatedly that its the League title he wants this year,so you can bet on Mancini rotating his team for the Europa Cup and then crashing out as he has already done in the Champions League.

Now the second reason.
With all the furore surrounding the Suarez-Evra matter, this is exactly what both clubs don't need.
With Liverpool left seething at perceived injustice from the FA, Man Utd know they have to face a side trying to seek some measure of revenge and an Anfield baying for blood.

What more if the match needs a replay at Old Trafford.

Man Utd still have a lot of matches to play in the Europa Cup and FA Cup.
Any additional matches between these two titans of English football will only benefit one team. 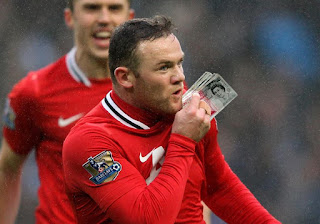