THE FRENCH ARE TOAST OF NEWCASTLE

Breaking News
Newcastle have signed so many French players, that they have decided to unveil their new club logo today. It appears that this move was designed to make their French players feel at home. 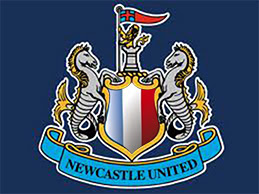 Personally I think that the logo shown below would have been much better but what do I know?

Manager Alan Pardew has also decided to change his name to Alain Pardou after his players kept mispronouncing his name over and over again.

Anyways, if Newcastle keep on playing champagne football, then good for them!

Until next time,
Au revoir!