Is Luis Suarez the best player in the world?
In a word:YES! 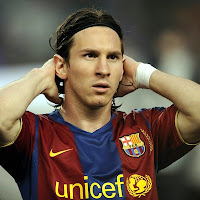 You would say predictably that Leo Messi, Cristiano Ronaldo and Wayne Rooney are way better.
In some ways you are right.
However in terms of the big picture, you are dead wrong.
Let me do a comparison between Luis Suarez and Leo Messi who is widely acknowledged as the world's best player so that you can see what I mean.

CLUB
In terms of domestic competition this year, Luis Suarez has scored 4 goals and notched 2 assists in 12 games for Liverpool in the League and also has 3 goals and 3 assists in 3 games in the League Cup.
This means that Suarez gets a goal/assist every 1.25 games.

Now let's compare that to the great Leo Messi.
In 12 games for his club in La Liga, Leo Messi has scored 15 goals and notched 6 assists.
In 5 games in the Champions League, he has scored 6 goals and notched 3 assists.
Excluding, the UEFA Super Cup and the SuperCup, this means that Messi gets a goal/assist every 0.5 of a game which is an astounding record.

This means that Messi is the better player right?
Not exactly...
Keep in mind Suarez is playing has just joined  Liverpool in January this year, a side which has gone through
a lot of personnel changes not including changes in management and ownership.

Secondly, Suarez is not playing for Barcelona.
He is playing for Liverpool FC a side which doesn't really have a great supporting cast around him.
He doesn't have Iniesta, Xavi, Dani Alves, Villa and Pedro creating chances for him.
He has the great Charlie Adam, Stewart Downing, Jordan Henderson, Andy Carroll and Dirk Kuyt helping him out.
Which players would you rather have as your team mates?

Thirdly,
How long has Messi played for Barcelona? 11 years!
Since 2000, when Barca offered him treatment for his growth hormone deficiency.
How long has Suarez played for Liverpool? 11 months!

Lastly,
The question has to be asked :could Leo Messi go into any team in the world and be as huge a success as he is with Barcelona?
Could he join Liverpool and win the Premier League title, the Champions League and World Club Cup?
That's the mark of a truly great player.
The ability to go into any team and be a success.
That's where the next part comes in...

INTERNATIONAL
Lets look at Messi's stats for Argentina.
He has in his international career 19 goals and 20 assists in 66 games for Argentina which translates to a goal/assists roughly every 1.7 games.
Messi only has the 2008 Olympics Gold Medal to his name.
Argentina with Leo Messi didn't win the 2006, 2010 World Cups and the 2007,2011 Copa Americas.
Argentina was knocked out in the round of 16 in 2010 World Cup and in the quarter finals of 2011 Copa Americas.

If Messi is such a great player why is it that he hasn't been able to translate his form to international level?
You would think that with strike partners such as Tevez, Lavezzi, Sergio Aguero, Higuain linking up with him and midfield maestros such as Pastore, Banega and Di Maria creating chances he would have won a trophy of note by now.

Now lets look at Luis Suarez...
In 43 games for Uruguay, Suarez has 22 goals and 5 assists which means a goal every 1.6 games which is a slightly better record than Leo Messi...
Now lets compare the trophy count.

Luis Suarez and Uruguay achieved 4th place in the 2010 World Cup with Suarez being instrumental.
Uruguay won the 2011 Copa America for the 15th time with Luis Suarez being named the tournament's Most Valuable Player.

As you can see Luis Suarez has in his time with the national team achieved a much better record than Leo Messi.

Therefore with all the evidence presented above I will conclude by saying... 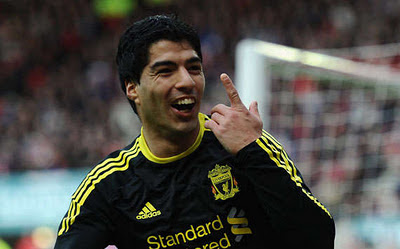 Luis Suarez is the best player in the world!
And he plays for Liverpool !
Posted by Jerry De Silva at 21:06